Head-On Collision: How to Actually Win a Good Fight

Newton famously said that every action has an equal and opposite reaction. Yes, this applies to relationships – particularly the way two people clash during a fight.

When a couple is deep in conflict, think of it as two freight trains racing toward one another. The stronger and faster they go, the more disastrous the impact will be. Plus, in all likelihood, at least one, if not both trains, will be severely damaged and even totally destroyed.

Therefore, in order to win a fight, the goal is to avoid a collision altogether by reducing the speed, intensity, and even changing the complete direction of the conversation.

There’s just one problem with this approach: What if you feel that you are absolutely right and you deserve to win the fight? Why should you not hold your ground and stick to your principles?

I want you to always remember this point: if someone wins, that means that the other person loses. If they lose, two things will happen.

Therefore, we must keep in mind that the goal of an argument is not to win the fight! Rather, it is simply to avoid a collision by changing tracks and resuming the journey, while heading blissfully together in the same direction.

So, how does this work? How does one simply change tracks?

Please indulge me further in my train analogy: For those who have ridden the subway, you know the feeling of watching a train fly by you in the opposite direction. As you look out the window, all you see is a blur of faces and streaks of colors. There is absolutely no connection to the people in the next train.

However, from time to time, a train pulls up alongside yours, heading in the same direction and at the same speed. It is during those moments when you look outside and instead of feeling the rush of motion, it is as if 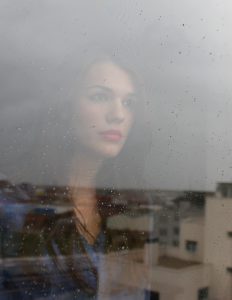 everything stands still and you can clearly see all the faces of the strangers in the next train. You can smile, wave and feel a real connection, almost as if they are in the same train with you.

This paradigm is exactly how we fight.

Take a husband and wife for example – angry, frustrated and armed with a laundry list of reasons why they each think they are right. Ultimately, like two trains, they will either violently collide, or just fly past the other in a blur and squander the opportunity to truly connect.

What if there was a way for the two trains to pull up alongside each other and move in the same direction so that they can once again connect and see one another, rather than only see a blur?

This is a common exercise that I do with my clients. I invite them to look at the other person’s point of view, digest it, and really try to see it through their own eyes. This is not only an intellectual exercise but an emotional one as well.

Instead of asking, “why is my wife so stubborn?”, try this: “I wonder why this issue is so important to her?”

Instead of asking, “why does my husband always think he is right?”, try this: “I wonder what I could be doing better to show him that I value his opinion and feelings”.

Thus, even if you don’t agree, perhaps you can stop and appreciate who they are and why they feel the way they do. Slowing down to appreciate the person more than the agenda, is what we talk about when we say that relationships take hard work and compromise.

Whenever we stick to our guns and hold our ground, nobody wins.

What we ultimately want to do is each abandon our own rigid views, in place of a suitable compromise that shows we care more about the person than our perspective. After all, you must ask yourself, do you want to be right, or do you want to be happy? Having a strong marriage is not about winning, but about showing support and care to your best friend.

Ari,
Great article and really like your perspective. So many times we get caught up in the moment. We definitely need to apply your principle of respecting the other person’s view. Thank you.

Excellent article. I love the analogy with the trains as it really gives you a good perspective on what you are saying. My wife and I had a rough year last and got through it. Though had I seen this a bit earlier we may have gotten through it earlier! Thanks for the perspective!

Ari
Well written. This holds true in business also. Getting to a win-win is better than a win-lose, which inevitably results in a lose-lose situation!

Thank you Leon! This definitely applies to business. Great point!!

Love the analogy of the trains. Thank you for sharing such wisdom. We’re officially hooked 🙂

Thanks for joining us on this ride!

That was a nice article. Like you said wanting win always makes us arrogant and also hurts our spouse.

Actually the be benefits of winning an argument doesn’t worth the cost. It is true that you may prevail, but at the expense of hurting your spouse and marriage.

I’m a train geek! And have been party to or witnessed a few derailments over the years, messy stuff! Much prefer watching a change of tracks to see the other off safely to its own particular destination. It would be dull if we all headed in the same direction

This is a wonderful article that has lots of thoughts in it! I wish all couples can understand the difference between being right and being happy because most of the time they think that being right is being happy!

Here’s is a similar article that I have written about the signs that one’s marriage is about to reach an end(part1):
http://mai-elsayed.webnode.com/news/love-and-war/

And 5 things to do to protect your children from divorce (part2):
http://mai-elsayed.webnode.com/news/divorced-with-children/

Plz let me know what you think of my ideas!

Spot on with the train/subway analogy Ari.

Reminds me of the fence and nail analogy where, even if you mend things, there’s still a whole in that fence. The best way to WIN a fight is to avoid it completely.

Sometimes, letting the other vent out their frustration, while you staying calm and being ready to discuss things (not argue) is the best way for us to show our partners our love, and to ensure that both of us come out winners.

Beautiful article. Excellent strategy. This reminds me of one of my own life-changing events wherein I took 100% responsibility for the assaults of 6 other drivers against me in rush hour traffic. This was so different from any other viewpoint I had ever experienced that it shocked me. I could see that I was responsible for my feelings of frustration and building rage against their assaults, but taking responsibility for their actions against me robbed me of being a victim. It also deflated my ability to be perpetrator. All I could feel for them was love and forgiveness. That was miracle enough, but what happened next was a miracle not unlike that of Moses parting the sea.

For ages, I didn’t understand the words of Christ when he said that the meek shall inherit the Earth. Such humility is the foundation of true, unconditional love which binds us together. Also, I had not understood it when he had said that the First shall be last, and the Last shall be first. But when I understood the self-concern of ego as separate from others, I knew that being “first” was poisonous, for it drives a wedge between us.

Thank you for reminding me of this bliss.

Ari,
Great article. I definitely want to be working from a position of understanding rather than competing

After nearly forty years of marital bliss to the same women, this is the first professional insight into what we have experienced. I commend the author on stressing what I discovered by accident, and several early years of trial and error, being right isn’t that important. This advice would be a great must read for all couples considering marriage as well as a refresher course for survivors of the ten year mark. The comparison to motion and trains was a brilliant analogy of advice that would seem so simple, yet, often gets lost in the struggles of a real relationship. I suspect this information would have made my journey much easier, as his suggestion of stepping back and considering the partners’ needs before taking a stand. As an Alpha male, I often found this very difficult to do, suspecting genetic predisposition played a factor in my stubbornness. His solution of considering why the battle is important to the other person makes more sense than my self discovered application; is this really worth the effort and do I love this person enough to go through this. He makes the approach must less stressful and takes the emphasize off failure being an option. I am truly glad I read this post, thank you.

Very good article on relationships and how to appropriately fight where there are no losers.

Oh, that’s an excellent analogy… subways. This is pure gold Ari. We find when we stop to consider why they may be reacting they way they are, we can better manage the conversation not on a topical level, but at the root.

Greatly appreciate the feedback! Thanks for reading!

Loved this post. It is a lesson that I’ve learned through a great friend, Experience. In the first few years of marriage, my husband and I were like those trains. Now, 14 years later, we are able to see one another’s perspective. When we started doing this, it drastically changed everything.

Some couples don’t realize the value in giving up the fight within the marriage, in order to fight for the marriage. We have to make each other stronger. Winning a fight only makes the partner a loser, right?! I loved that part of your post. No one wants to be married to a loser.

Thank you very much!

My husband and I have been married 43 years. We are both very strong willed and we love each other very much. We have occasional disagreements. We have learned to compromise on most things. Both of us are willing to listen to the other’s point of view. When we both feel so strongly about a topic that we can’t find a way to compromise, we simply agree to disagree and then let go of it. Our relationship and love for each other is more important than any disagreement. We don’t have a perfect marriage. We have been through the fire of me healing from a childhood of incest, We have grown together when I have seen other couples grow apart. I agree with your article. Thanks for introducing me to your blog on Twitter. I subscribed to it.

Good fight is one that we face together, Be for our rights, whether by life or by our love (relationship). Thanks for sharing this good work!

[…] This article originally appeared on astyner […]